I disagree the proposal on the following reasons:

My opinion about the reasons in the question:

These rocks are of interest only to the person who opened them. They can rarely be used as a reference point, which is what other questions on SE can be. Individual questions cannot be found, and once a question is answered or forgotten, it ceases being relevant to anyone.

No, these questions can be very useful for googlers of the reverse direction.

For example, imagine if someone puts a question with the photo of an acanthite, and he gets the answer that it is acanthite. Then, it is right that this content will say only that it is an acanthite on that specific photo. But, the whole content will be useful for anybody wanting to know, how an acanthit looks!

The vast majority of rocks are of very poor quality. After introduction of the guidelines etc, only a handful of people actually improve their questions in a way that they can be answered. Although well meaning, this is useless.

It should be decided induvidually on the specific questions. If the question is poor quality - for example, its photo is too low quality for an identification, or the text is crap - then it should be closed as "needs clarity", or "needs focus". If not, it can, and should be answered.

Many high-rep old-timers are becoming less active, including myself. I can only speak for myself, but I guess this is a factor in the disappearance of others as well.

This is a simple statistical effect: as the years are going, obviously the relative ratio of the old users of the site decrease. Here is a stat about the attracted answer upvotes by user registration year: 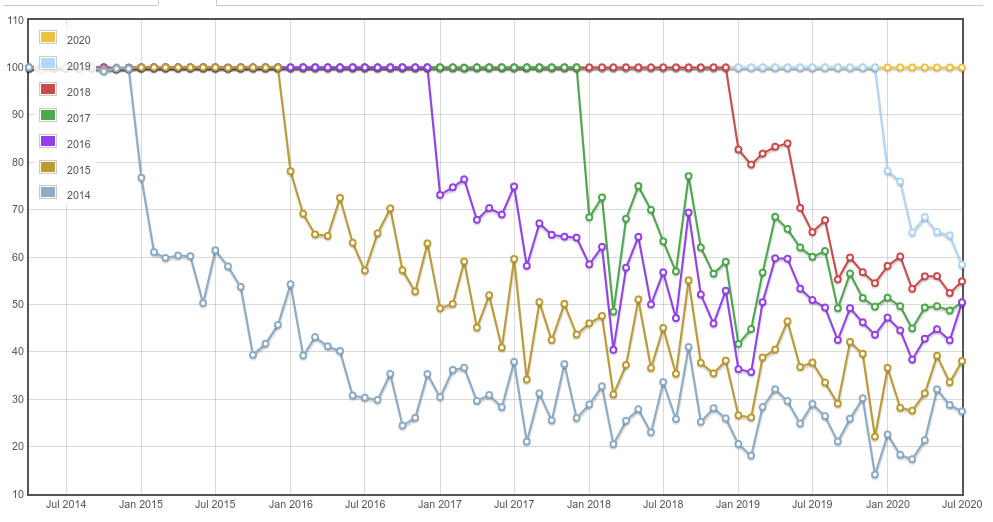 As we can see, always the recently registered users are the most active, and the relative proportion of the users registered in a specific year typically decreases. But it is not bad - it only shows, that we have more users.

Run also this query on other SE sites - you can also see, that all the SE sites work roughly so. 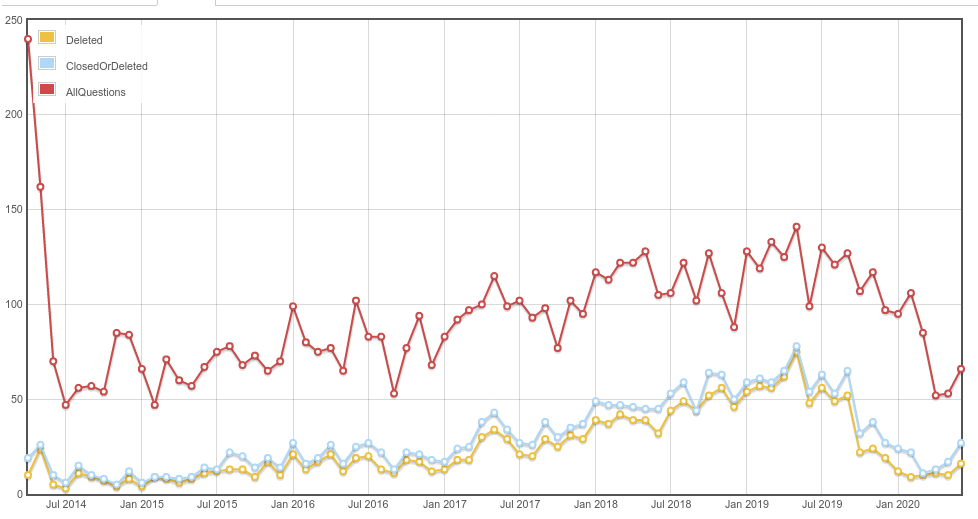 It looks that - after an initial burst - the site started to grow. But, also the closed/deleted questions started to grow with it, what practically compensated the increasing popularity, making the count of the accepted questions roughly stagnating! And, since about last summer, the stats get a quickly decreasing direction. I am sorry to say, but imho the site is on the best way to kill itself by moderating everybody out.

When I go on ESSE this is what I see: (image about a lot of rock identification questions)

Go to the site and check the questions. I see the case not so bad. Anyways, if you would close only the really bad rock id questions, would already preserve the balance (the site would not be overwhelmed by crap rock id questions).

Summary: Don't close all the rock identification questions! Close only the bad ones; and use the rest to attract new googlers!